Over Here: WWI and the Fight for the American Mind

World War I. The Great War. The War to End All Wars. The conflict that enveloped the globe from July 28, 1914, to November 11, 1918, backlit an intense home-front struggle as Americans debated their individual and collective relationship to the conflict. Should the United States be involved in the war? If so, then to what extent and in what capacity?

The vigorous—and, at times, vicious—public debate over these questions was facilitated by an unprecedented array of media and performance outlets, including such recent inventions as recorded sound and motion pictures. Throughout the period, government at all levels, in addition to private organizations and individual citizens, used these communication tools in an increasingly sophisticated manner, all in an effort to win the hearts and minds of the nation. Truly, never before in the country’s history had Americans been so widely, and energetically, courted. And never in its history had the concept of Americanism—of what it means to be an American—been so hotly contested.

Drawing from collections across The New York Public Library, Over Here: WWI and the Fight for the American Mind explores the manner in which public relations, propaganda, and mass media in its many forms were used to shape and control public opinion about the war while also noting social and political issues that continue to resonate, such as freedom of speech and the press, xenophobia, and domestic espionage.

Support for The New York Public Library’s Exhibitions Program has been provided by Celeste Bartos, Sue and Edgar Wachenheim III, Mahnaz Ispahani Bartos and Adam Bartos Exhibitions Fund, and Jonathan Altman. Additional support for this exhibition has been provided by the Bertha and Isaac Liberman Foundation, Inc., in memory of Ruth and Seymour Klein.

Learn more about this exhibition.

Recorded sound was used extensively during World War 1, as propagandists quickly seized upon this emerging medium's potential to reach large, diverse audiences. For its part, America's music industry churned out a steady stream of war-related songs, many of which were penned by leading Tin Pan Alley composers, such as Irving Berlin and George M. Cohan. Featuring lyrics that were, by turns, sentimental, comic, heroic, xenophobic, or chauvinistic, recordings of these songs performed by popular artists of the day sold in the hundreds of thousands. 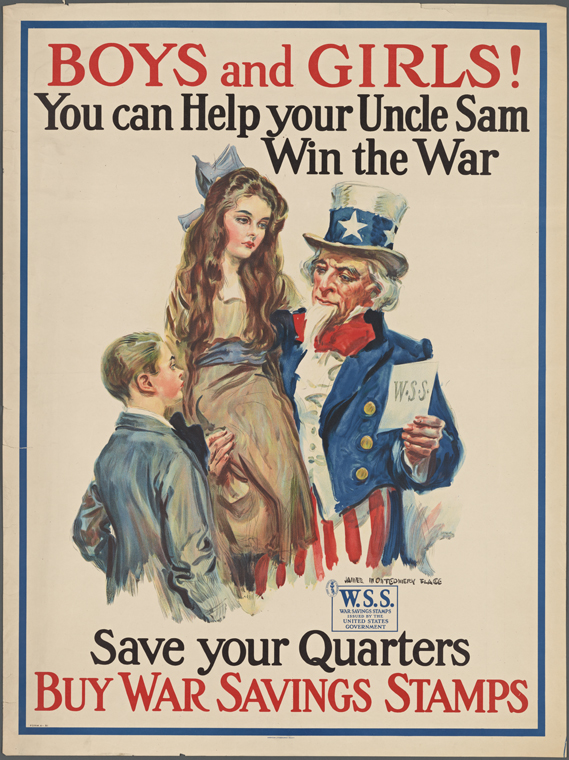 Boys and Girls! You Can Help Your Uncle Sam Win the War...

Although most children could not afford Liberty bonds, which cost at a minimum 50 dollars, the government actively encouraged them to purchase War Savings stamps. These stamps, which sold for 25¢, were to be collected, pasted into purpose-made booklets, and eventually redeemed for full-fledged war bonds.

In James Montgomery Flagg’s Boys and Girls!, a grandfatherly Uncle Sam teaches children a lesson about patriotism through participation in the War Savings stamps program. While this Uncle Sam offers a kinder, gentler countenance than does his famous counterpart in the recruitment poster I Want You, his message—that children were expected to prove their commitment to the war effort through thrift and obedience—is no less compelling.

See more about this image.

Spies Among Us: World War I and The American Protective League

In the wake of the United States’ war declaration against Germany on April 6, 1917, dozens of extralegal vigilance organizations such as the Knights of Liberty, American Rights League, Boy Spies of America, American Defense Society, Sedition Slammers, National Security League, and the Terrible Threateners sought to ensure Americans’ full participation in the war effort, often 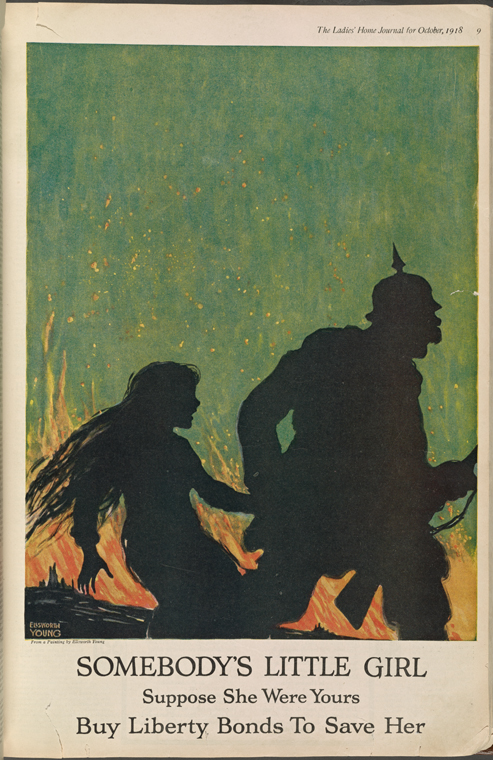 American women’s magazines, like other mainstream periodicals of the era, cooperated with the CPI’s guidelines, providing their readers carefully screened content that favorably portrayed the country’s participation in the conflict. Articles offering suggestions on the ways in which women could assist the war effort were pervasive, along with patriotic stories trumpeting the important roles that women were playing on the home front and overseas.

With their huge subscriber bases, popular women’s publications served as valuable, ready-made channels through which the government was able to reach this strategically important demographic. They also provided an avenue through which its propaganda efforts might be extended, as exemplified by the placement of artist Ellsworth Young’s lurid Liberty bond advertisement “Somebody’s Little Girl” in The Ladies’ Home Journal’s October 1918 issue.

See more about this image.